GIVING BACK TO MY ALMA MATER, BUTLER UNIVERSITY

A Post-Production Pow-Wow with the College of Communication

Earlier this year, I had a fabulous time sharing my experiences in the voiceover world with some awesome Butler University College of Communication students. It was an honor to share as much as I could (which wasn’t easy in just one class!) about ADR, looping and voiceover. 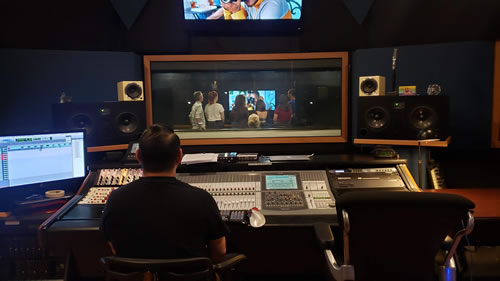 Looping does NOT have to be a mystery. It’s the additional vocal audio added in post-production to add realistic background and ambiance in films, television, animation, video games and commercials.

And what the heck is ADR? Automatic Dialogue Replacement. Also in the post-production process, it’s the re-recording of dialogue by the actor or a voice actor who can fit the bill, to improve audio quality or make changes to the dialogue.

How many genres of voiceover are there? SO many! There are commercials for television, radio and the web, corporate narration, IVF (“Press 1 for…Press 2 for…”), video games, animation, promos, radio imaging, audiobooks, dubbing, and that’s just to name a few.

It’s also important to note that the industry is always changing. So, how do you keep up? 🎙

I had such fun sharing my passions for all-things-audio with such killer students. It was not only eye-opening but equally as hysterical to look back and reflect on how much the broadcasting and communications world has changed since I was a student at Butler. It was…just a few years ago.

Thanks sincerely to Mark Harris for bringing me into the mix. Here’s to the next generation using their talents, voices and following their hearts!😉