LESSONS FROM BEING A MAGAZINE COVER MODEL

Be genuine. Be you. The world deserves it. 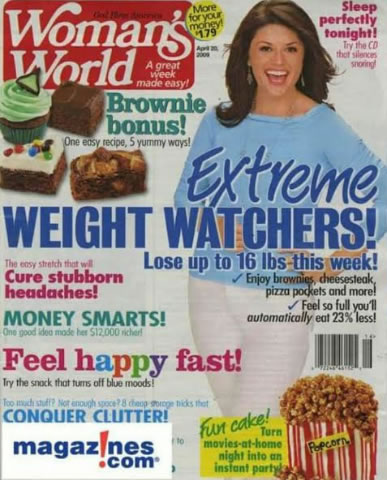 “Say cheese!” It’s the age-old formula for the perfect smile when you have your picture taken. When you look into the camera and position your teeth just so to make the “ch” sound, science says it creates an automatic smile. For me, the biggest, most honest smile happens when I can simply be myself. And the most genuine version of myself doesn’t just say cheese. She says “Cheesy!”

This cover reminds me to always be ME, to be genuine. When I used to try to walk in the shoes of others, they never fit quite right. I have always felt “extra”. Too much energy. Too much love. My hands are too big. My voice is too loud. Too much joy. Too much emotion.

However, the exact minute I started accepting all the things that make me, me, doors began to open. And I am eternally grateful that I finally decided to embrace the real Amy. And it’s important to take away, the same goes for YOU.

By the time I had been contacted by my commercial and print agency for the Woman’s World Magazine cover shoot, I had been acting for a while. Never had I considered modeling. What was ‘lifestyle’ modeling? I was a size 8 at this shoot, and I found out soon after we shot this picture that I was, in fact, pregnant with my now 11 year old daughter. Meaning, I wasn’t a size 2. But they were interested in me for this cover? I guess the fact that I’m unapologetically extra was a good thing!

I showed up the day of the shoot with a smile, open mind, and every part of the real Amy. I was out-of-my-mind excited when I saw a giant fan blasting on set, knowing it was going to make my hair fly back off my face like a superstar. The makeup artist shared with me stories of his days as Luther Vandross’ personal MUA, and I bonded with the people working wardrobe and the photographer. I had such a fun day getting to know the people behind the scenes.

It was crazy to see myself on all of the grocery shelves just a few months later. In fact, crazy is a true understatement. Now a few months along in my pregnancy and very nauseated, I dragged myself to Albertson’s to pick up some groceries. And there I was, smiling hugely back at myself (and every other shopper in the store) from the shelves, and, of course, looking as cheesy as ever.

I kept my cool. That day I left with about 10 copies of the April 20th, 2009’s Women’s World Magazine. I just looked like a big fan of the magazine, right?

This job opened more doors for further print and lifestyle modeling over the years. I’ve since gone on to model for Fiat, Enterprise Rent-A-Car, Mattel and others. And every time, while still listening to direction, of course, I made sure to actively bring my most authentic self to the job.

I’m a nutty and silly cheeseball who wears her feelings on her sleeve. I’m myself, and I’m proud of it. Who are you?

No matter who that may be, always be you. Bring the most candid version of yourself to your projects, your interests, your work. I promise that the right doors will open for you the more you do so, and this world deserves it!